Entrepreneurship - All around me

When I first quit my job to take my stab at "Entrepreneurship", I had the goosebumps, I was nervous, I was excited... but more than anything, I felt that I was doing something heroic. The general atmosphere back then was that Entrepreneurship was for the brave. Giving up a fat salary at a corporate company to do something by yourself seemed to qualify for "Bravery awards". Those initial few months (Stretched onto a year), I felt above all. I felt I was following the dream. Well I was following the dream but along with it was a sense of pride that I was doing something my peers couldn't do or chose not to do. At get-togethers, people were always telling me how cool and awesome it was that I was doing my own thing.

The months passed, and then the years passed. It took almost a year for it to sink in to me that as an entrepreneur one was actually alone. There was nothing about bravery, nothing about being heroic - It was just a way of life. In fact, one that is mostly prominent in India and around the world. Corporate jobs had come in much later. Everyone around us is mostly an entrepreneur. The chai-wallas, the paan shops, the bakers, the local grocery, the cobblers on the streets, the salons, the restaurants - They are all entrepreneurs going around doing their business. I started learning from these people, looking at the small things they had implemented to get things done! We have an interesting term for this in India - Jugaad!

India is one of the toughest places in the world to do business but I do believe it's the most interesting place in the world to do business. So many micro-innovations in the way people work just to work around some medieval law or policy in the legal system. People find ways to be legit or work around the legitimacy of an issue. And this is Jugaad. You don't learn this anywhere else in the world. Look around the streets of India and you will see this in plenty.

The other day, I made a trip to Sidhivinayak temple (Temple for Lord Ganesha)  in Prabhadevi, Mumbai. (http://en.wikipedia.org/wiki/Siddhivinayak_Temple,_Mumbai). As you go towards the temple entrance, you notice hundreds of stalls selling flowers, sweets and other offerings for God. Now all of these guys are calling out to visitors asking them to buy the offerings from their stores. This entire ecosystem here is full of innovation. I've been going there over the last few years and I notice how every visit of mine throws up something unique. 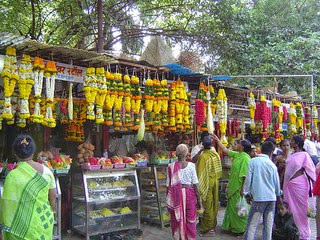 A couple of years ago, these vendors would come up to you and offer to take care of your footwear while you completed your prayers. You just needed to buy your offerings from his or her stall. This worked as the general place to keep slippers was usually crowded. Over time, all of the stalls started offering the same service of storing your slippers. The next time I went over, one gentleman came up to me and offered to take us into the temple through the VIP entrance to avoid the long queue. Of course, he just wanted us to buy offerings from his stall and not any of the others. We bought offerings from his store and he kept his promise and took us in through an entrance reserved for VIPs. We saved over an hour's waiting time. Over time, all the stalls closer to the temple started doing the same. I went there a week ago once again. As I drove the car near the area, one guy comes running up saying that most of the area close to the temple is a "No Parking Zone" and the car could get towed away. He offered to take us to a safe parking spot and look after the car while we offered our prayers. The only catch again being that we had to buy our offerings from his store! This was brilliant as we were very happy leaving the car under his safe keeping. In fact, as we were entering the temple we saw the Police tow trucks tow away some cars in the No-parking zone. On asking the stall guy who we bought our offerings from, he said that he's got a guy sitting near our car and other cars under his "safety" and that the cops would not touch any of the cars under his protection! Also, while I bought offerings from his store and left my footwear with him, he refused to take the payment due to him then and asked us to pay him on our way out of the temple. I wondered why but understood the same when I was leaving the temple. While I was leaving, my friends and I were discussing that we should buy sweets for others as well. When we came to pay this gentleman for the offerings we had taken from his store, we also landed up buying sweets and "prasad" for our friends and colleagues thus spending a decent sum of money at his store.

Well, without getting into the nitty-gritty of legality and morality of many of the things that these guys are doing, I have never been more impressed with the way people think when they have to! Brilliant out-of-the-box ideas to bring people to your store. How does one differentiate when there are 50 of your competitors right next door. Do you only fight on price? A price war benefits none. And here these guys were trying to work out small little details that could make a visitor's life easier and hence give them more business. The guy taking care of cars was basically solving a huge issue as in cities like Mumbai, ease of parking is a huge factor when it comes to making up one's mind to going someplace.

These guys haven't done an MBA from an IIM or got there Engineering degree from an IIT. These guys may not have even completed their 12th standard (Grade) and look at the level of innovation. This further fortified my belief that India has so much of innovation at grass root levels that are not showcased because we like what is sexy, what is cool. Technology innovation, mobile apps, e-commerce, web based products, medical innovation - These are innovations that drive public opinion and thought today. These are the ones who win the innovation awards. How does one bring for academic study the small little innovations that we sometimes take for granted? I believe there's a lot more to learn from these little case studies. I for one, learnt so much on what one can do to differentiate from competition.
Posted by Kumaran at 12:32 PM 1 comment:

It's been a year and a half since I wrote anything up here. I keep asking myself why I never do write anything here anymore. Then I figured that it's not just me. Most people don't seem to be doing blogs anymore. The only ones actually doing blogs are companies, startups, products etc. It seems to be a commercial thing nowadays! I think that's because most of us are now more into Facebook and Twitter. You think sometime and in a moment's notice - you've shared it already!

Anyways, looking back at my journey over the last couple of years as an entrepreneur - I've realized that being Co-founder of Moojic has taught me more than I could ever learn all through my life! I've learnt so much every day. Every day is a new crisis - It's either dealing with Client issues, Operational nightmares, employee issues or financial issues! And being Co-founder, you realize that you actually land up doing the shittiest of jobs just so that things get done! End of the day, if someone's not doing what they're supposed to do, you just pick it up and start doing it yourself. Be it, cleaning the office or filling up excel sheets or just walking to the store nearby to pick up paper for the printer. When things have to get done, they just do and you don't wait around for someone to do it!

With Moojic, I have learnt that when you're first starting things, you want everyone to believe as much as you do. But over the journey, you get lost and then realize that people working with you are young kids. And they're so confused. We as inexperienced leaders of startups sometimes get people wrong and expect everyone to commit the way we do! But then that's mostly not what works! And as a startup, one should expect the unexpected and plan for it. I've learnt that sometimes chaos just isn't the best way forward and we at Moojic have spent the last month and a half putting systems in place to ensure things run smoothly. I think we are at a better place than where we were 3 months ago. However, in a small setup like ours, when you turn your focus so deeply into one aspect of the business there are other aspects that take a hitting. But then that's taught me that Sales isn't the single most important function as you build a business! Operations takes the forefront as one scales.

I've also decided to spend more time this year on myself. To get myself to fitter levels, to find time to something different and to meet more people on a social front. I've been more of a social recluse these last few years and it's time to reconnect with people and go out more often! I've also decided to share things that I learn on this blog more often! That's Kumi Version2.014 for you!

And for all those entrepreneurs out there - I have to warn you that having an idea is the easiest part of starting up! It's what comes after that brings you down! So to all those with those lovely ideas out there - remember it's execution that counts and patience to stay out the long run! All the best. Let this year bring the best out of all of us and the best for all of us! Happy New Year 2014 to all of you out there.