I just returned from Legazpi city after an eventful day with Mt. Mayon - known as one of the most perfectly formed volcanoes in the world having a perfect cone shape. Out of the many volcanoes in the Philippines, this is the most active, dangerous and has erupted the most number of times in history as compared to any other volcano in the Philippines. It is known to have erupted more than 49 times in the past and is still at alert status 2! 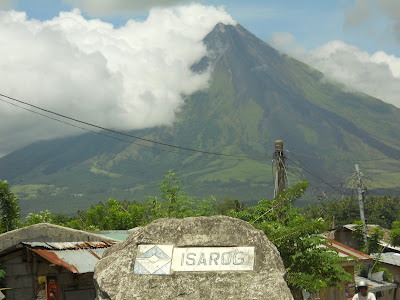 Getting to Legazpi from Naga shouldn't be too difficult. You can rent a car and get to Legazpi. It's a one and a half hour drive and if I'm right there are also buses available connecting the two cities. Ask for the way to the bell tower of Cagsawa Church... That's where all the tourists go to take pictures of the volcano and also shop for souvenirs.

There are a bunch of kids there who stand around willing to take photos for a small price! I initially ignored them but later got a kid to take some photos. Just had to pay the kid 20 pesos. Check out some of the pics he took below: 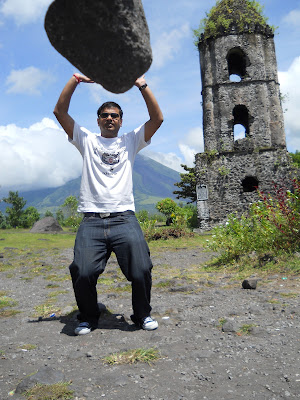 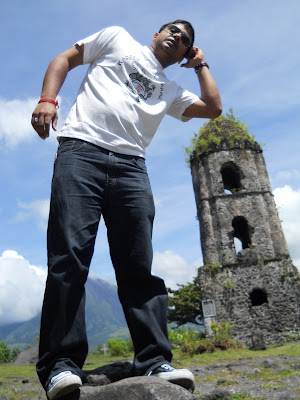 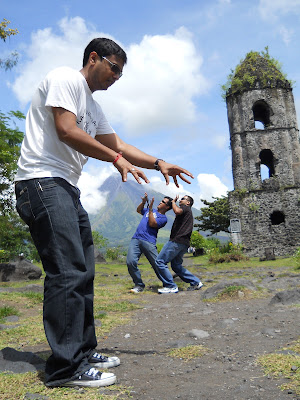 There are a number of shops in this area and you can pick up some pretty cheap t-shirts and other souvenirs. Some note worthy items that you can pick up are articles made out of the volcano ash! I got some fridge magnets and another show-case item made of the ash. Pretty neat stuff. There were also some nice t-shirts available.

I spent about a day at Legazpi and you can see the grandness and splendor of Mount Mayon from anywhere near the city. In fact, managed to get some neat snaps from the plane too as I was leaving Legazpi for Manila.

I finally am back in Manila after all most two weeks of continuous travel - starting from Carmona, Singapore, Davao, Iloilo, Legazpi, Naga City, Guimaras and many more small places on the way. Again.... WOW Philippines!

Wait for my update on Iloilo and Guimaras in the next few days....
Posted by Kumaran at 10:49 PM

good job on the pics! keep doing that sort of stuff